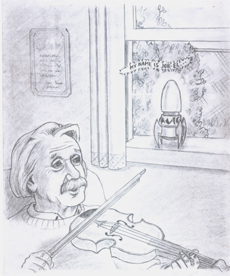 The old man was growing weary of fiddling.  The only reason he was spending this fallow time tugging on his bow was that his nurse had hidden all his pipes and he wanted to do something with his hands.  Once he was in a string quartet, but all the members were gone now.  Once before that, in the old country, he had appeared on stage in a great music hall and played some of his favorite melodies, and the public adored him.  The next day a review full of sumptuous praises was published in the newspaper, and he clipped it out.

"Look here.  Look at this," he would tell friends as he pulled it from his billfold.  "I'm not what you think I am.  I'm a famous fiddler."

Maybe if he had practiced more as a little boy that is what he would be doing for a living today.  Maybe he would be happier.  Then again, his belly would probably not be as full.  He certainly could not take issue with the life the Fates had handed him.  There were those he had loved in his way, and his accomplishments appeared considerable enough.  If only people wouldn't treat him as if he were brittle as an eggshell.  For example, what he wanted now most in the world—even more than his pipe—was an ice cream cone.  As his bow caressed the strings he began formulating fanciful plans for sneaking out to the ice cream parlor before the nurse knew he was gone.

"Herr Doktor," the nurse called, "your mail is here."

"Is there anything important?" he asked as she breezed into the bedroom.

"The Dean of Faculty mentioned yesterday that this one would come.  It's a request that you speak at the freshman banquet next month.  It's only a formality that he asked you.  He doesn't expect you to accept."

"Freshman banquet?  You mean the first day of the school year?"

"Yes, they have one every year."

"I have not met a freshman in years.  I believe I would like to go."

"Doktor, it would certainly be an unnecessary strain."

"Strain shmain.  What else is there?"

"Something from Mr. Ben-Gurion.  Probably a thank-you note.  All the rest look to be from children.  I'll open them and send your pictures to the ones with a return address."

"Won't you leave them here?  I think I would like to read some mail from children today."

She did, and the old man flipped a tuft of furry white hair from his face with the bow and resumed playing.  For a moment he thought there was a slight buzz in his superb violin.  Unthinkable.  But as the hum got louder he realized it was coming not from the instrument at all, but from the window behind him.  He turned to see what it was, and sitting on the open window sill was the oddest-looking mechanical device he had seen all day.  Beyond the window, rolling by on Mercer Street, was a collection of teenagers in a 1939 DeSoto convertible.  He decided the device was the second-oddest machine he had seen all day.  He changed his mind again when the thing addressed him.

"I have sought out, through this device, the greatest mind on this planet to tell you that an event will take place in a short period of time which will concern you as well as the rest of the world," were the words he heard.

There was an odd intonation of the words.  They seemed to run all together, and yet he heard them with exquisite clearness.  As he approached the machine, the words became neither louder nor softer.  They were constant.  Very interesting, he thought, as he considered what this visitor might be.  Then he realized that he could not tell whether the machine was speaking German or English.  He drew some conclusions.

"Pardon my simplicity," the old man said, "but have I the honor of addressing God?"

The machine resumed its announcements as if in answer.  "My name is Jor-El and I am speaking to you through the use of a device which relays spoken information directly into the mind of the individual it contacts.  My recording is incorporated into a navigational device whose purpose is to lead my son Kal-El to a planet inhabited by intelligent creatures whose thought patterns roughly correspond with those of the humanoids of my planet, Krypton.  By the time you receive this message my world will have been long destroyed by natural forces.  Since the cataclysm, my infant son has been traveling through space at a speed close to that of light, and the time has passed for him slowly enough so that he is just beginning to feel the effects of a day without food.  At this moment he is slowing down in preparation for entering your field of atmosphere."

This was too fantastic.  The doctor's mind raced over possible methods for one of his students to have set up this prank.  He put his hands tightly over his ears and still heard the words perfectly clearly.  He played his violin and the sounds of the music seemed on another level altogether.  What he was "hearing" from this machine was not sound.  Could it really have been a telepathic recording?

"Just as the navigational device was drawn to a world of intelligent beings, it was drawn to you, the most highly developed intellect on your world.  The purpose for this is to implore you to take in my son Kal-El as your own and see that he is raised to proper manhood."

The possibilities of this being a hoax were quickly being eliminated in the old man's mind.  He was listening intently.

"My son is of a highly developed humanoid species.  Legends of the creation of our world imply that we are an offshoot of another world somewhere, and that at some time many worlds were seeded with humanoids.  This is why I hold out hope that you yourself may be one.  It would matter little, however, if you were not, as long as my son were exposed to the proper intellectual stimulation during his upbringing.  I will attempt to pinpoint the location of Krypton in relation to the course my son's small rocket traveled and in that way enable you to determine where and when he is likely to touch down on your world...."

And the old man scurried to his desk and notepaper, almost excited.  He would get past the nurse today, but not to buy an ice cream cone.