Did you foresee the merchandising possibilities inherent in Superman?

Jerry Siegel: One day, I read an article in some leading magazine of the time about how Tarzan was merchandised by Stephen Slesinger so successfully.  And I thought: Wow! Superman is even more super than Tarzan; the same thing could happen with Superman.  And I mentioned it to Joe, he got real enthused, and I walked in a day to two later, and he had 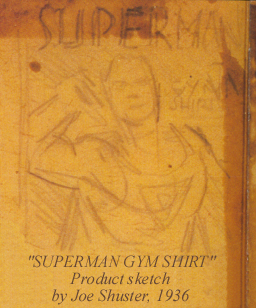 made a big drawing of Superman showing how the character could be merchandised on boxtops, T-shirts, and everything.  Later we put this merchandising business into one of the very early Superman stories.  The publisher looked at it and thought it was a good idea, and Superman has been a terrific earner from character merchandising ever since.

How did you name the Superman characters?

Shuster: Jerry created all the names.  We were great movie fans, and were inspired a lot by the actors and actresses we saw.  As for Clark Kent, he combined the names of Clark Gable and Kent Taylor.  And Metropolis, the city in which Superman operated, came from the Fritz Lang movie, which we both loved.

What led you to make Superman a visitor from another planet?

Joe Shuster: Jerry reversed the usual formula of the superhero who goes to another planet.  He put the superhero in ordinary, familiar surroundings, instead of the other way around, as was done in most science fiction.  That was the first time I can recall that it had ever been done.

Were you influenced by the Edgar Rice Burroughs John Carter of Mars stories?

Jerry Siegel: I don't think they had much of an influence on me when I wrote The Reign of the Superman.  However, when I did the version in 1934, (which years later, in 1938, was published, in revised form, in ) the John Carter stories did influence me.  Carter was able to leap great distances because the planet Mars was smaller that the planet Earth; and he had great strength.  I visualized the planet Krypton as a huge planet, much larger than Earth; so whoever came to Earth from that planet would be able to leap great distances and lift great weights.

Initially Superman only leapt great distances.  How did his flying evolve?

Joe Shuster: He was mostly leaping tall buildings in the beginning.  There were cases where he would leap off a tall building or swoop down, and at that point he would look like he was flying, I suppose.  It was just natural to draw him like that.

Some critics claim that Superman first flew in the animated cartoons, and that this influenced you to make the comicbook character fly.

Joe Shuster: Not that I recall.

How did you do the artwork for the Superman story published in Action #1?

Joe Shuster: I think we did the roughs in pencil, then transferred them to other paper.

Jerry Siegel: He was a very meticulous worker.  This was in the days when he didn't have to turn out tons of work, so he had the time to put his best efforts into it.  In later years, he was absolutely swamped with work and had trouble with his eyes.

Joe Shuster: Somebody once pointed out to me that it was so meticulous.  It had to be, because I couldn't see: I had to get down to about an inch above the paper in order to see the fine lines.

Jerry Siegel: That's true: his head was very close to the paper.  And on top of that, his family had financial problems, and his apartment in Cleveland didn't have heat.  Joe would be working often wearing gloves, and several sweaters, and a jacket or two—he was working under that handicap, on top of his vision problems.

Joe Shuster: Action #1 was taken directly from the newspaper strip: It was pasted up.  They were in a rush to meet the deadline on the first issue.  Everything happened very fast: they made the decision to publish it and said to us, "Just go out and turn out 13 pages based on your strip."  It was a rushjob, and one of the things I like least to do is to rush my artwork.  I'm too much of a perfectionist to do anything which is mediocre.  The only solution Jerry and I could come up with was to cut up the strips into panels and paste the panels on a sheet the size of the page.  If some panels were too long, we would shorten them—cut them off—if they were too short, we would extend them.  You see, some of the panels were extended to fit the size of the page; it was quite an art job.