How did Lois Lane come about?

Joanne Siegel: Joe was redrawing the strip, and it was going to be more realistic, rather than cartoony.  I used to model for him every Saturday until he had enough drawings.  He made so many stock drawings that it got to a point where he didn't need any more.

Joe Shuster: To me she was Lois Lane.

Joanne Siegel: We became such good friends by that time we decided we would always stay friends.  I did a lot of travelling but kept in touch with Joe; we corresponded, I did a lot of modeling in Boston after that, but the job with Joe was my first modeling job, I posed for a lot of painters and illustrators in Boston and Provincetown and New York—and some photographers in New York, I never did fashion modeling; I never was tall enough.  I wanted to grow more, but this is as high as I got.

Did you have a chance to make suggestions about Lois Lane in the early stages?

Joanne Siegel: No, I had no part in that at all.  Jerry thought of Lois Lane long before I came on the scene.

Joe Shuster: She was a great inspiration for me, though.  She encouraged me, she was very enthusiastic about the strip; it meant a lot to me.

Joanne Siegel: Many times he used to write to me and say that he was about to give up on it; and I'd say, Keep at it and you'll make it.  I had such a feeling about the strip and about them.  I told him, "You're going to be very famous some day."  But Jerry was the brains behind Lois.  People get the word "model" confused: there's the model that's an inspiration and the model that poses.  I was the model that posed; he thought of Lois Lane before I came on the scene.

Joe, did you have any male models for Superman or Clark as you did for Lois?

Joe Shuster: No, he was just inspired by many of the heroes in fiction and the classics.  And of course, I was inspired by the movies.  In the silent films, my hero was Douglas Fairbanks Senior, who was very agile and athletic.  So I think he might have been an inspiration to us, even in his attitude.  He had a stance which I often used in drawing Superman. You'll see in many of his roles—including Robin Hood—that he always stood with his hands on his hips and his feet spread apart, laughing—taking nothing seriously.  Clark Kent, I suppose, had a little bit of Harold Lloyd in him.

The stance of laughing at evil is more characteristic of the early Superman, who toys with crooks and suspends them from telephone wires.

Joe Shuster: That's the one I drew.  Jerry and I always felt that the character was enjoying himself.  He was having fun: he wasn't taking himself seriously.  It was always a lark for him, as you can see in my early drawings.

Where did Superman's costume come from?

Joe Shuster: It was inspired by the costume pictures that Fairbanks did: they greatly influenced us.  He did The Mark of Zorro, and Robin Hood, and a marvelous one called The Black Plrate—those are three that I recall that we loved.  Fairbanks would swing on ropes very much like Superman flying—or like Tarzan on a vine.

Before I ever put anything on paper, Jerry and I would talk back and forth.  Jerry would say, "Well, how about this, or how about that, or how about doing him like this?"  And I agreed the feeling of action as he was flying or jumping or leaping—a flowing cape would give it movement.  It really helped, and it was very easy to draw.

I also had classical heroes and strongmen in mind, and this shows in the footwear.  In the third version Superman wore sandals laced halfway up the calf.  You can still see this on the cover of though they were covered over in red to look like boots when the comic was printed. 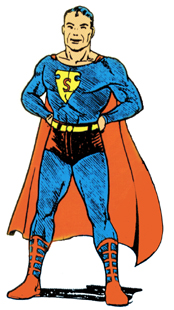 Who came up with the "S" insignia, and how many versions did it go through?

Joe Shuster: Jerry and I discussed it in detail.  We said, "Let's put something on the front."  I think initially we wanted to use the first letter of the character's name.  We thought S was perfect.  After we came up with it, we kiddingly said, "Well, it's the first letter of Siegel and Shuster."  Progressively, as the strip evolved, the emblem became larger and larger; you'll notice at the beginning it was quite small.

It was almost a more simple triangle at the beginning, wasn't it?

Joe Shuster: Actually, it was made like a shield.  I can't describe it, but I was thinking of what they call a crest.  Yes, I had a heraldic crest in the back of my mind when I made it.  It was a little fancy triangle with curves at the top.